Goal of the project

In the last decade, a worldwide effort to build a usable quantum computer has been made. Trapped atomic ions are one of the most promising physical quantum computing architectures and have been the focus of our research at the University of Innsbruck.

Within the ERC starting grant QCosmo, we aim to explore the physics and harness the computational potential of a more complex trapped ion system: polyatomic molecules. As a first task, we tackle the long-standing challenge of preparing, controlling and characterizing single polyatomic molecules at the quantum level using techniques that have been developed for quantum computing with atomic ions.

Performing spectroscopy on molecular ions has a long and successful history. Unfortunately, the commonly used methods need to destroy the molecules in order to detect their state. Within QCosmo we will perform non-destructive measurements with quantum logic methods that have been invented for atomic clocks with trapped atomic ions. These quantum logic methods couple the ion of interest to an atomic ion that is suitable for quantum computing and for which quantum control techniques have already been developed. These quantum logic techniques are at the heart of one of today’s most precise atomic clocks.

The core concept of quantum logic spectroscopy is based on the coupling of the spectroscopy ion’s motion to the logic ion’s motion via the strong electromagnetic interaction. This coupling allows us to transfer the techniques that have been developed for quantum computing, onto less accessible species, be it atoms or molecules.

Recently, these techniques have been transferred to molecular ions at PTB in Germany, NIST in the USA, and the University of Basel. To date, these quantum logic methods have been limited to diatomic molecules and to precision spectroscopy at the millisecond timescale. We aim to transfer these techniques to ultrafast timescales and to complex polyatomic molecules, opening a new window into investigating dynamic quantum processes of molecular ions that have not being studied yet.

We plan to transfer these spectroscopy methods to molecular ions by exploiting the fact that each photon absorption event comes with a small momentum kick to molecule. We will adapt an existing single photon absorption detection technique by measuring the momentum of the absorbed photon using the co-trapped atomic ion. This technique is independent of the molecular species and the transition type and will thus provide a solid basis for our experiments. More details on the proposed methods can be found in the publication Ultrafast infrared spectroscopy with single molecular ions

Complex molecular systems are expected to play an important role for emerging quantum technologies. In particular, ultrafast quantum processes in molecules have been proposed for hosting a small-scale quantum information processor operating over 1000 times faster than current devices. We envision that these operations can be the heart of a hybrid molecular-atomic quantum information processor, powered by the quantum logic techniques that we will develop within QCosmo.

We are currently looking for motivated PhD students and PostDocs that will join us on this scientific journey. If you are interested in coming to Innsbruck, contact Philipp Schindler. 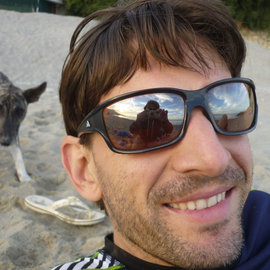